ECDIS CATZOC stands for "Category of zone of confidence in data" for the ENC data of the ECDIS.
On Paper Charts the Hydro-graphic survey details and its relative accuracy used to be shown on the source data diagram. ENC do not show this source data diagram but present this data as CATZOC. ECDIS generally includes this data in ENC as an area meta-feature object as "Quality of Data" overlay. This CATZOC overlay can be switched ON and OFF to remove clutter from ECDIS screen.

Each geographical area is assigned CATZOC values to indicate whether data meets a minimum set of criteria for position, depth accuracy and seafloor coverage, indicating limitations of underlying data and hence the safety margin to apply during the appraisal stage of Passage plan. ECDIS CATZOC values in ENCs are shown using a triangular shaped symbol pattern containing stars. Higher the numbers of stars better the data quality. Highest level of data quality (A1) has 6 stars while lowest (D) has 2 stars. A thing to note here is that 1 star is not used for CATZOC value to avoid possible confusion with a rock symbol. Unassessed areas for CATZOC are shown as the symbol (U).

IHO details these CATZOC parameters in a CATZOC Table. Table below shows these details along with IMO Symbols (Click image to enlarge). 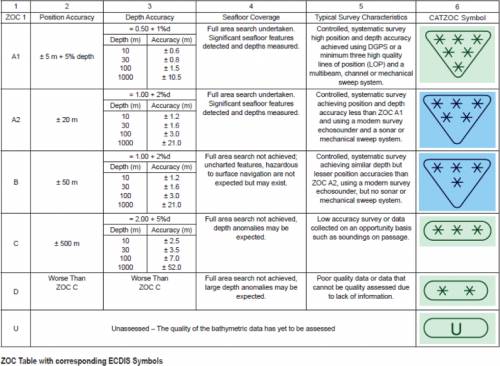 Another interesting thing is that while on Paper charts, the source data diagram was shown as tables with date of survey, ECDIS CATZOC is more about the quality of survey! No wonder when NOAA took a survey for "CATZOC, Simplified Symbols and Colour Palettes", 80% of 2400 commercial and recreational mariner's response was for simplified symbol they suggested as below.

Are Paper Charts better in Areas for ENC with CATZOC "C" or less ?
No they are not ! ECDIS ENC data have been collected from same Hydro-graphic department and in the similar manner as your paper chart, so both are equally accurate. In fact, when ECDIS IMO requirements were set, most ENC providers, for areas where ENC details were missing, simply used Paper Chart details to create ENC before the deadline and perhaps used a default baseline of ECDIS CATZOC "C" !