Frugal Innovation or Jugaad technology is a popular buzzword in corporate world and internet these days. While internet is full of improvised arrangements, corporates are more interested in Frugal innovation to tap the "Bottom of pyramid" (BOP) mass (Recommended reading "The Fortune at the Bottom of the Pyramid"). India and other developing countries like Brazil, Africa have continuously innovated to cope up with everyday problems with most economical and robust "Jugaad Technology".

Jugaad is an Indian hindi word, meaning to find a workaround for getting things done, specially without proper resources. While Jugaad techniques started with inexpensive technical innovation, today it is spoken in negative sense to bend rules for achieving results.

Frugal Innovation on other hand is about inexpensive techniques developed for resource lacking environment for which there is already big demand. Most Frugal innovation products are used either in villages where there is no electricity or used by people with less money.

To understand basic difference try comparing a Jugaad Vehicle with Tata Nano. A Jugaad vehicle might use diesel irrigation pump on steel frame with wheels. Of course these Jugaad vehicle cannot confirm with vehicular regulation, not tested and risky. TATA Nano on the other hand is tested vehicle which re-invented car design to give more interior space. With intention to tap middle class section of developing nation, NANO was launched in India at a price of almost 2000 USD ! Below I am adding some Frugal innovation and Jugaad technology pics.

The thin line between Frugal innovation and Jugaad technology goes more blur when Jugaad takes an organized approach to sell Frugal Innovation products to masses. Below are some Frugal Innovations which gained mass acceptance

The list is endless, a low cost projector by Frugal digital, or bamboo windmill by Mehtar Hussain and Mushtaq Ahmed to pump water from paddy fields or motorcycle-based tractor by Mansukhbhai all eyeing a big market ignored by corporates. These Frugal innovation products are result of out of box thinking and are not only inexpensive and eco-friendly but also saves money by requiring less maintenance. 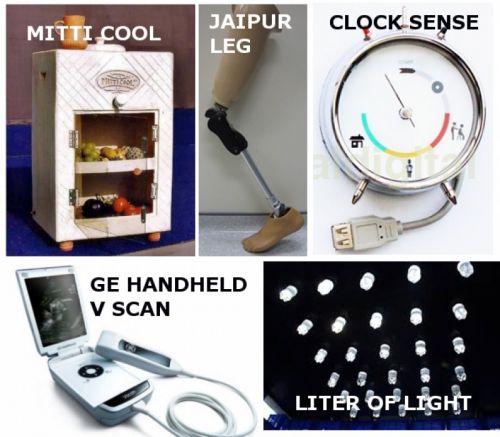 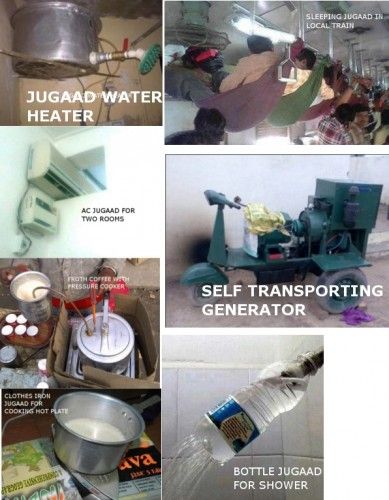 Some MBA Experts think Frugal Innovation is a passing fad! Bill Gate said the same thing about Internet and Google came into picture. Infact Google too can be placed in this Frugal innovation rule during initial days, when they were asked to move their website from college server they used old junk computers with duct tapes in their garage. Google became magnate of Internet and online world today.

Nokia tapped the Bottom of Pyramid by their NOKIA 1100 model in India. Model 1100 removed all high-fi features and concentrated on simple handy features like led light in their phone at an affordable range for villagers in India. Nokia later expanded into high class society ignoring middle class which led to Chinese mobiles enter BOP and yet again tap middle class masses in developing countries. These mobiles did frugal innovation not only to make cheaper mobile phones but added features which mattered the most e.g. long battery life. Nokia did not innovate, their strategy to remove some features to cut down cost did not help them when phones with better features came at half the price. Today Micromax an Indian mobile company is expanding into developing countries and many frugal phones without brands are selling more than Samsung or IPhone.

Frugal innovation is the future ! While some highly educated executives may ignore it, NGO and organization like Frugal Digital in Denmark, GIAN in India, NESTA in UK are helping these frugal innovation to scale up and get organized for bigger battle with corporates. Companies like GE Healthcare, TOYOTA Energy, TATA, Godrej, Siemens, Philips are understanding this and are investing in R&D for better frugal products.

The biggest myth with Frugal innovation is that it is all about cutting cost ! BOP are cost conscious masses but they want risk free solutions with low recurring cost than cheap products! The product needs to solve a regular problem. They are ready to pay if the frugal product can improve their life, with low cost overhead, have essential features and minimum maintenance. TATA had to change their tagline for Nano from "World cheapest car" which made it loose trust to "City Car", "Nano twist experience awesomeness" and "Best Mileage Small Car". A 100 USD Laptop does not solve any problem in rural India where there is no electricity and hence does not have market.

While Frugal innovation and Jugaad technology is considered new thing in some developed countries, it is neither unique nor new. Just a logical thinking will make you realize that it always existed. In very simple terms it means innovation for masses not classes. Maruti ruled Indian Car industry by its Maruti 800, Bollywood makes masala movies for everyone ! People use strange jargon for this simple philosophy. Some call it social entrepreneurship (recommended reading :I have a dream by Rashmi Bansal) some call it Frugal innovation. Think about it "Whatsapp",a no frill Mobile app may very well be considered as a Frugal product which gained mass acceptance not only because of its inexpensive nature but for simple essential features. Whatsapp focused on essential Frugal innovation (Recommended How does whatsapp make money).

Frugal innovation wants patience, it works in an unconventional manner and targets everyone from BOP to top. It demands innovation mixed with technical and local environment knowledge. Frugal innovation or Jugaad technology is perhaps best described by MarkidesBy breaking the rules of the game and thinking of new ways to compete, a company can strategically redefine its business and catch its bigger competitors off guard. The trick is not to play the game better than the competition but to develop and play an altogether different game.So whats your views about Frugal innovation / Jugaad Technology ?

LIFE AS IT IS MIXED