Capt. Panda clarifies STCW 2010 courses OR did he ?

Capt. Panda clarifies STCW 2010 courses OR did he ?

STCW 2010 Courses to do have been interpreted in different ways by maritime examination centers and Merchant Navy colleges in India, to their own advantage. Last time when I wrote STCW 2010 courses, it still did not simplify the things ! To add to this chaos, different MMD required different documentation for the same Certification. This confusion is not only frustrating mariners but also wastes our vacations with unnecessary Maritime Courses.
Nobody knows which maritime course to do, yet you are doing courses every vacation as per STCW 2010 - JAHAJEE's law of shipping


As the deadline to implement the STCW Certification comes near, it was no surprise that Nautical Advisor to GOI, Capt Panda issued letter to clarify this doubt. I got this letter dated 08 Jan 2015, and since the image isn't very clear will quote
Consequent to adoption of MS STCW Rules 2014 the COCs, COPs and endorsements need to meet the requirements under the STCW 2010 & MLC 2006.

There have been varied interpretations and at times extended interpretation leading to different methodologies by different examination centers which is not desirable. In order to ensure uniform application annexed information may be strictly adhered to with immediate effect. The attached annex highlights the application and compliance dates of all the modular courses and thus clarifies all issues on the subject.

With respect to the provisions under Chapter VI of STCW Conventions and related provisions of Chapter VI of MS STCW Rules 2014, it is hereby informed that there are no changes in the modular courses under the said chapter except for PSSR and SSO course from STCW 1995 to 2010.

All certificates issued under STCW 1995 for all courses of chapter VI, other than SSO and PSSR may be accepted as compliant with STCW 2010 provisions.While it might seem to explain in very simple terms for transition from STCW 1995 to STCW 2010, there is still one doubt, why is the letter not yet published as DG Shipping Circular / directive ? I got this information from my friend who took picture of this letter at Mumbai MMD. While I don't have attached annex mentioned in letter, the concerned chapter and entire MS STCW Rules 2014 can be downloaded from DG Shipping website hereI will follow this with concerned notice from DG Shipping, if any, and also my COC renewal, which I will be doing this year. Would also appreciate if someone can confirm about the authenticity of this letter as well as share his experience for COC renewal procedure. Thanks in advance. 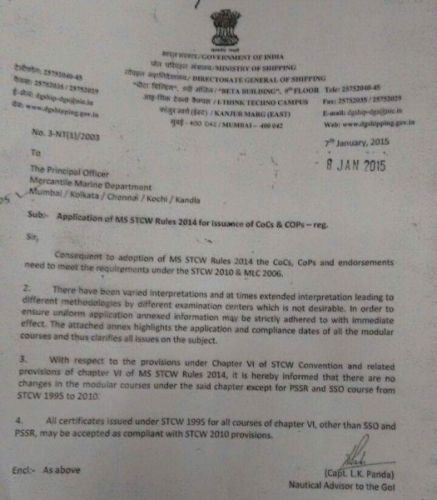