DNS Course to be abolished in 2016

DNS Course to be abolished in 2016

As more and more uninformed aspirants join Merchant Navy in India expecting quick money, count of unemployed cadets is increasing day by day ! DG Shipping announced financial help for Indian Cadets few months ago and we were in doubt if such efforts will be beneficial for anyone in the long run, however in the latest DG Shipping circular dated 02nd November 2015, they have stated their intention to abolish Diploma in Nautical Sciences Course by August 2016.

Some points worth highlighting


While most colleges may have collected the required data when the financial help for Deck cadets was announced by DG Shipping, authenticity of such data will always be debatable. Some colleges did placements where the cadets were selected but once they completed the college, they found companies asking them to wait for more than an year or two ! 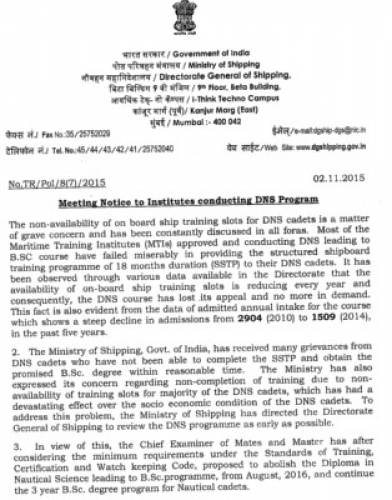 I wish the meeting comes out with a permanent solution which will be beneficial to all, the unemployed cadets, the Maritime Colleges, Shipping companies in India and the maritime industry in general. You can read the Circular here (pdf)
Rishi Kashyap | 03-Nov-2015 06:50 | EDIT | REPLY